For the first time since the start of the pandemic, the Department of Health and Senior Services made some — but not all — of its data on the coronavirus outbreak available to download this week.

In a new tab on its website, DHSS now includes accessible data breaking down tests, cases and deaths by date as well by county. On Thursday, cases among residents in long-term care facilities for the past seven days were added too.

Other states, like Texas, California and Virginia, have made their underlying COVID-19 data available to download for months.

The new data provides a more detailed window into the coronavirus’ spread across the state over time.

Lisa Cox, a spokeswoman for DHSS, wrote in an email Thursday that the case shown on March 4 is not actually the state’s earliest case — but was “actually someone that was tested in August.”

Cox said the individual tested in August likely had chronic symptoms unrelated to COVID, and when the onset date of those symptoms were entered into the system by the local public health authority — the system automatically defaulted to the earliest symptom date.

“Our first reported case was tested on 3/7 and the LPHA never did enter a symptom onset date for her, so that is where she’s stayed on the Epi Curve,” Cox wrote.

Additionally, 10 previous cases reported in February are not shown in the data now available for download. The additional February cases appeared to show the virus was present in Missouri more than a month before it had been announced. When the Kansas City Star first reported on the cases in May, DHSS had said they were based on revised dates of when symptoms first began.

Cox said the agency is now solely using test date for cases, rather than the symptom onset date.

Chris Prener, an assistant professor of sociology at St. Louis University who has been closely tracking and compiling data on the virus’ spread in Missouri, said the release of the data is a huge step.

But he would like to see other data points collected by the state — like figures on racial disparities — made more accessible as well.

“It’s well-formatted. It’s well-curated. But it represents a fraction of what appears on the website,” Prener said. “And so I would certainly like to see more.”

Cox said DHSS does have plans to release more underlying data for download, and “demographic data is on the list.”

Recent backlogs and database errors have caused data to be reported retroactively. For example, earlier this month 136 deaths were reported in a single day — but DHSS clarified they had all actually occurred before October.

The data released Tuesday showing the date COVID deaths occurred will be helpful in piecing together a clearer picture of how many deaths have taken place over time when numbers increase dramatically, Prener said.

“It can help us understand, ‘Is this something that’s happening because things have gotten worse now? Or is this a reporting issue?’” Prener said.

The “data dumps” were an issue Parson highlighted himself, stressing in a briefing Wednesday that people should rely on seven-day trends rather than single-day spikes.

Based on Thursday’s data, there had been 566 COVID deaths in September.

On Wednesday, the state also introduced the Centers for Disease Control and Prevention’s calculation for positivity rate onto its dashboard — which differs from the state’s.

The CDC’s method, which is more widely used, allows for a more accurate comparison between states.

“Many states calculate the rate differently, which means comparing rates reported out of each individual state is often misleading,” Parson said.

“So no matter how many times a person is tested, each test is counted toward the rate,” Parson said of the CDC’s method.

However, DHSS’ method of calculating the positivity rate results in a much higher figure for the same seven days — nearly double at a rate of 20.1 percent.

During a briefing Wednesday, Parson described the method as a more “conservative” calculation. The state’s “de-duplicated” rate means that individuals who have already received either a positive or negative test prior to that seven-day period would be excluded from the number of people tested that week, according to a news release from the governor’s office.

More than 900,000 Missourians have been tested more than once since March, the governor’s office said. Cox said essential workers or employees and residents of long-term care facilities, prisons and congregate living settings are examples of people who get tested more frequently.

According to the COVID Tracking Project, a collaborative effort that tracks COVID data across the U.S., Missouri is one of only five states that publishes all the metrics needed to calculate the positivity rate three different ways. Earlier this month, the site outlined how the three calculations can vary widely in the results they produce.

The CDC outlines the methods on its website, and explains that it calculates the positivity rate based on the number of positive tests out of total tests conducted because, “data received at the federal level are de-identified and, therefore, are not able to be linked at the person level for de-duplication.”

Benjamin Neuman, a virologist and the head of Texas A&M University-Texarkana’s biology department, said both methods work — but they will tell you different things. DHSS’ method will often overestimate the positivity rate on a per test basis, Neuman said.

“I think it’s more a style question than a substance question,” Neuman said, noting he would rather err on the side of seeing all tests factored in.

Despite the different methods, entities should make clear which they’re using and how they’re calculating it in order to avoid being misleading, said Lee Riley, a professor and chair of the infectious diseases and vaccinology division at the UC Berkeley School of Public Health.

“What we want to do is try to clarify as much as we can for Missourians — that they know what the real numbers are,” Parson said. “And when you do see these spikes, that you know what’s behind the spikes…” 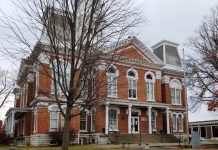 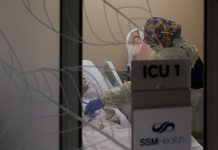 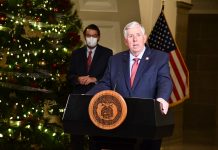