First things first, there’s one thing that’s absolutely certain: Missouri Republicans are in no danger of losing their legislative majorities.

When the 101st Missouri General Assembly convenes in January, the GOP will still dominate both the House and Senate.

But the outcome of Tuesday’s legislative elections around the state could still have long-lasting consequences.

If Democrats pick up two seats in the Missouri Senate, they’ll deny Republicans a veto-proof supermajority in that chamber for the first time since 2008.

In the House, Democrats need to pick up seven seats to take away the supermajority that the GOP gained in 2012.

What would that mean? If Democrat Nicole Galloway manages to defeat Republican Gov. Mike Parson, it could be a game changer for the party.

And if Parson is victorious — and polls show him leading in that race — Democrats would still strengthen their legislative hand.

The seats most likely to change are in 33 districts where Democrats and Republicans have had competitive elections since 2012, with 26 favoring Republicans and seven leaning Democratic, along with two that flipped parties in the 2018 elections.

Facing political headwinds, especially in the suburbs, Republicans remain confident they can stave off major Democratic gains, pointing to the party’s long track record of winning tough races in Missouri.

With that in mind, here are 10 legislative races expected to be among the most competitive on Election Day.

Senate Majority Leader Caleb Rowden is in the fight of his political life to hold onto his seat representing Boone and Cooper Counties.

Rowden squeaked out a victory in 2016 with only 51.2 percent of the vote — drawing even in Boone County, home of the University of Missouri-Columbia, and decisively winning the smaller but more conservative Cooper County with nearly 71 percent of the vote.

This year he’s facing off with Democrat Judy Baker, a former state representative who is well known in the district following runs for Congress and state treasurer.

And unlike 2016, Rowden can’t count on President Donald Trump to carry Missouri by 19-percentage points again, amping up the challenge in a district that voted for Barack Obama twice and Hillary Clinton in 2016.

This St. Louis County district exemplifies the battle for the suburbs taking place in the era of Trump.

Sen. Andrew Koenig, R-Manchester, is a founding member of the Senate’s conservative caucus who cruised to victory in 2016 with 61 percent of the vote.

But since his victory, Democrats have made gains in the district, even flipping a GOP-held House seat last year.

He’s facing off with Rep. Deb Lavender, D-Kirkwood. She has raised far more money than the incumbent, and a recent poll commissioned by Missouri Scout showed her up 49 percent to 45 percent, with 6 percent undecided.

Normally, this district that includes parts of Lee’s Summit and surrounding areas in Jackson County would be considered safely Republican.

That changed when The Kansas City Star reported that Republican Rick Roeber was accused by his adult children of physically and sexually abusing them when they were young.

Roeber, who is running for the seat left open following the death of his wife, has denied the allegations. But he’s faced bipartisan calls to drop out of the race, and more recently had his Missouri FOP endorsement revoked.

He’s facing off with Democrat Chris Hager, a political newcomer who works in information technology. Hager has seen a surge of fundraising support since the accusations against Roeber became public, but the latest campaign disclosure reports filed this week show Roeber is still outspending him in recent weeks.

GOP outside PACs have mostly stayed out of the race. But the House Democratic Campaign Committee and a Democrat-aligned PAC called Protect Missouri Freedom have combined to spend more than $50,000 in the race this month.

In a rematch of that race, the Republican business owner will face off with Democrat Jean Pretto, a local school board member.

And an open seat in a district won by former U.S. Sen. Claire McCaskill in 2018 is giving Democrats hope.

Democrats nominated James Shackelford of Liberty, a graduate student who previously served with the USO. So far he’s raised $81,000, with only $15,000 cash on hand reported this week. The House Democratic Campaign Committee has spent more than $20,000.

The Republican candidate is Chris Brown of Kansas City, a retired teacher and small business owner. He’s raised $38,000, with $24,000 cash on hand reported this week. The House Republican Campaign Committee has chipped in more than $30,000 in the race.

He’s facing off in a rematch with Democrat Bill Otto, a former legislator who lost to Hannegan by only 315 votes two years ago.

Another open seat, thanks to term limits forcing Republican Rep. Chrissy Sommer out of office.

Democrat Cindy Berne, a horticulturist from St. Charles, has raised more than $76,000 so far, with roughly $18,000 cash on hand reported this week. The Democratic Party, House Democratic Campaign Committee and Protect Missouri Freedom have spent more than $35,000.

Republican Adam Schwadron, a small business owner from St. Charles, has raised $10,000, with $2,300 cash on hand this week. The House Republican Campaign Committee and other GOP-aligned PACs have spent nearly $80,000.

Incumbent Rep. Steve Helms, R-Springfield, has held this Greene County seat since 2016. He was re-elected in 2018 by a little more than 800 votes.

Democrats see the race as an opportunity to give the party a rare legislative seat outside of the I-70 corridor.

Democrat Betsy Fogle, program director at Jordan Valley Community Health Center, has raised $153,000 with $34,000 cash on hand this week. The House Democratic Campaign Committee and other Democratic PACs have spent around $45,000.

Rep. Dan Stacy was first elected in 2016 to represent a Jackson County district that includes Blue Springs. His Democratic opponent ran hard against him in 2018, but Stacy still prevailed by nine percentage points.

But Democrats feel confident about Rhonda Dolan, a first time candidate who’s raised $68,000, with $27,000 cash on hand reported this week. The House Democratic Campaign Committee has chipped in $30,000.

Rep. Chuck Basye, a Republican who represents parts of Boone, Howard, Cooper and Randolph Counties, hasn’t had much of a challenge since he initially won the seat by knocking off an incumbent Democrat in 2014.

But Democrats see the mid-Missouri district as a possible pickup opportunity, with Adrian Plank of Columbia raising $55,000 and reporting nearly $18,000 cash on hand this week.

Basye has dwarfed his opponents fundraising haul, raising nearly $250,000 and this week reporting $52,000 cash on hand. But in a sign the GOP is taking the race seriously, the House Republican Campaign Committee has spent around $100,000 opposing Plank. 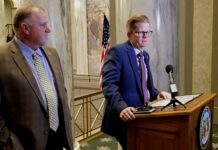