In normal times, the Missouri Bootheel has the highest rates of hunger in the state.

“But when the pandemic hit, it made an already bad situation much worse,” said Lisa Church, chief advancement officer of the Southeast Missouri Food Bank.

The organization’s pantries and mobile food distribution were seeing as many as three times more people coming for food assistance in the initial months.

The 16 counties that the food bank serves — located in the southeastern corner of the state — have also seen the highest rates of food-stamp applicants these past months, according to the Missouri Department of Social Services’ dashboard on social impact.

But in November, about half of those applications were rejected — a sharp increase from the months prior.

In Bollinger County, 53.5 percent of applicants to the Supplemental Nutrition Assistance Program (SNAP) were rejected, according to the department’s November monthly report.

St. Francois County had the largest number of applicants in the southeast region with 860 applications, and 45.1 percent of them were rejected.

But this trend is not unique to the Bootheel.

In total, the state received 58,627 applications for food stamps in November, and nearly 44 percent of them were rejected. That’s up from 27 percent being rejected in October and 37 percent in September.

The exact reason is unclear, but one possible culprit might be that many are facing long wait times as they try to call and finalize their applications. Some can’t get through at all.

When a person applies for food stamps during normal times, they have to complete an in-person interview with DSS staff.

However, in the beginning months of the pandemic, the federal Food and Nutrition Service waived this requirement for Missouri and many states. Then in the summer, the federal government began requiring most states to resume the interviews, but allowed the interviews to be conducted by phone.

Missouri has a call center designated for these interviews. Depending on their category of need, applicants have between seven and 30 days to complete this interview or their application will be rejected.

In effort to address the “historic” high call volume for interviews, DSS received approval from the federal government on Wednesday to suspend recertification interviews — or interviews for people who have been on food stamps previously and need to renew every 12 to 24 months.

Starting on Monday, Dec. 28, Missourians already receiving SNAP benefits and want to continue with the program will only need to complete and submit a recertification form.

“It is important for  Missourians to understand an interview is still required when they first apply for SNAP,” said Jennifer Tidball, acting director of DSS, “and that they must provide any requested information and complete and submit the recertification form they receive from the Family Support Division to ensure continuous SNAP benefits.”

Those working with food-insecure families said they hope this will help the relieve the call center’s volume. But the number of first-time or initial applications is very high.

Katherine Holley, an attorney with Legal Services of Eastern Missouri, which provides legal aid to vulnerable residents, said she once called the call center for seven days straight for a homeless client in October. She was never able to get through, and her client’s application was rejected.

That was just one case, she said. Many other Legal Services clients, and those from their partnering agencies, have experienced the same difficulties.

Because the local DSS offices are closed, the call center is the only way for people to complete their applications. She said it’s alarming for many agencies who work with food-insecure clients that the percentage of applications being rejected is so high.

“I don’t think it is a stretch to say that this is due to interviews not getting completed,” Holley said.

Where is the need?

In October, the county with the highest rate of food-stamp applications was Pemiscot, with 1,298 applications received per 100,000 people. Pemiscot is the county at the furthest southeastern tip of the state.

In rural areas, unemployment has been particularly challenging because there are few job opportunities, Church said. And even when people have been able to keep their jobs, their incomes have decreased.

“If dad is working in a manufacturing job and mom is working at a grocery store, they are both employed,” Church said. “But their earnings are such that by the time you account for mortgage, health care, children’s clothes and other needs, it’s hard to make those paychecks stretch.”

The Food Bank acts as a way to supplement those families’ food, Church said. They are currently serving 88,000 to 90,000 a month through all of their programs. That includes their food pantries, delivering 5,000 senior boxes each month and sending 1,200 backpacks to schools each week so children have food over the weekend.*

“I think sometimes people lose sight of the fact that SNAP benefits are an economic driver in a lot of communities, particularly smaller communities that may be more apt to have mom and pop grocery stores,” Church said.

According to the Food Research and Action Center, each dollar in federally funded SNAP benefits generates $1.79 in economic activity.

“It’s really the community who benefits from that economic impact,” she said.

And the need has continued to be high, she said. That’s why the Food Bank was happy to see the food nutrition provisions in the federal COVID-relief package, Church said.

The proposed package would also temporarily increase SNAP’s monthly benefits for six months, and temporarily suspend work requirements for SNAP-eligible college students while work-study programs may not be operating during COVID emergency.

It also clarifies “Pandemic EBT” covers each child under 6 in SNAP households, where a local school or covered daycare has been closed or has reduced hours.

More and more people are applying for food stamps for the first time in their lives, Holley said.

“The need is very high, but the number of people receiving food stamps (in Missouri) is decreasing,” Holley said. “Just terrible.”

* This story has been corrected to reflect that the Southeastern Missouri Food Bank sends 1,200 backpacks, not 12,000, to schools each week so children have food over the weekend. 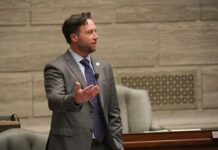