When the Grandview School District announced it would start the 2020-2021 school year with only virtual classes, school officials weren’t sure how it would impact fall enrollment.

But they soon found out.

From October 2019 to October 2020, Grandview’s K-12 enrollment dropped by about 450 students — or 11 percent, according to data The Beacon acquired through a public record request to the Missouri Department of Elementary and Secondary Education (DESE). For context, Grandview saw enrollment drop by less than 1 percent between the 2018-2019 and 2019-2020 school years.

But since COVID-19 shut down schools, pre-K-12 enrollment has dropped by about 29,000 students in Missouri — just over 3 percent.

Now, the Missouri DESE is working with local schools “to gain a better understanding on if these students transitioned to homeschool, a private school or another public school out of state, or if, in fact, they are truly unaccounted for,” McGowin said.

Across the 33 states studied in a December analysis from Chalkbeat and The Associated Press, enrollment dropped by about 500,000 students from fall 2019 to fall 2020. There isn’t any comprehensive, nationwide data yet available to see just how much the pandemic has impacted enrollment, but the Biden administration recently announced the launch of a new survey to analyze data from 7,000 schools nationwide.

In Grandview, some families “were scared and didn’t want to enroll anywhere,” explained Kenny Rodrequez, the Grandview district superintendent. For others, it was a matter of notifying the district of changes like moving to a new school district or homeschooling. Some students, however, are still unaccounted for.

So the district began increasing its efforts to communicate with families and locate students. Staff members make calls, send emails and sometimes conduct home visits. So far, about 70 students have been located.

“We still believe they’re going to come back,” Rodrequez said. “We’re still getting enrollments every single day — a little bit here and a little bit there.”

That rings true for Kirsten Lipari-Braman, chief executive officer for Gordon Parks Elementary School, which saw the biggest enrollment gap in its preschool classrooms. Gordon Parks, a charter school, had a waitlist for preschool prior to COVID-19.

“You couldn’t get in,” Lipari-Braman said. “The seats filled up so fast, and with the pandemic, we were struggling to fill our seats.”

She believes fear of COVID-19 led to the enrollment drop.

“People are nervous,” Lipari-Braman said. “They’re still scared because a lot of our children in Kansas City are not raised by the traditional mom and dad. They’re raised by grandparents, they’re being taken care of by older family members.”

Because neither preschool nor kindergarten is compulsory in Missouri, some families may be opting out altogether.

Once Gordon Parks began offering in-person school again in August, enrollment picked up, and each classroom is now at capacity, Lipari-Braman said.

How the loss of preschool affects students

With COVID-19 contributing to sharp declines in preschool and kindergarten enrollment, young children could be missing out on critical developmental opportunities.

“This pandemic literally brought big cracks we already had in this very volatile system…and it brought all that to the surface,” said Polly Prendergast, senior director at the University of Missouri-Kansas City’s Berkley Child and Family Development Center. “And now we’re kind of in a crisis.”

She emphasized the importance of children learning in person, especially at the preschool level.

“When children are in school and around trained professionals…I think children have healthier and better outcomes,” she said.

Schools often provide structure and resources, like food, shelter and clothing, that some families don’t have access to.

“Not that I don’t have compassion for teachers — of course I do,” Prendergast said. “But we have to figure out a way to have children back in school, particularly in the early years.”

According to the Center on the Developing Child at Harvard University, most of the brain’s growth occurs in the early years, and the quality of that development provides either a strong or weak foundation for a child’s learning.

Prendergast explained 90% of the brain is developed in the first five years of life.

Prendergast explained early childhood education is expensive because it does not receive as much state and local funding as K-12 programs do. She said the high cost contributes to under-enrollment and teacher shortages.

Solutions to low enrollment in Kansas City and beyond

Parent groups, city council members and education leaders across the country are scrambling to try to mitigate the problems created by the sudden drop in enrollment.

At an elementary school in New York City, the loss of 73 students could force the school to return nearly $300,000 in funding, according to The Wall Street Journal. Parents and City Council members have urged the Department of Education to suspend the amount owed and have requested amnesty from Mayor Bill de Blasio. Parents worry the funding loss would have detrimental long-term effects for their children.

Schools in Texas worry about losing funding if the state doesn’t uphold Hold Harmless, a policy meant to prevent districts from being penalized for low enrollment numbers during the pandemic. According to Texas Standard, an education coalition in San Antonio is urging Gov. Greg Abbott to extend Hold Harmless. A local nonprofit is trying to locate students by reaching out to families via phone calls, text messages, emails and home visits.

Meanwhile in Kansas City, an array of education leaders have united to tackle some of the most urgent enrollment-related needs in the region’s schools.

Leslie Kohlmeyer, director of SchoolAppKC, said when she started going through school applications for the current school year, she noticed numbers had “literally slowed to a drip.”

As a parent of two Kansas City Public Schools students, she realized the district needed to have some real discussions about where those kids had gone. So Kohlmeyer started reaching out to parents, schools and local nonprofits to find solutions and eventually formed a task force.

Now, the task force is made up of about 50 people, including representatives from Kansas City Public Schools, Operation Breakthrough, several charter schools, the mayor’s office, the City Council, the Kansas City Public Library and the Jackson County Health Department.

The group has met three times since November. Its goals? Tackling under-enrollment in preschool and kindergarten and increased dropout rates for 11th- and 12th-graders.

“These aren’t bad parents that are keeping their kids out of school…these are not bad kids that are failing,” Kohlmeyer said. “This is a bad situation, and no choice that they have is a good one.”

Some potential solutions the group has generated include: gaining access to the citywide text system to send information about services for students, connecting students with potential paid internships that also provide class credit, partnering with universities for tutoring programs, and persuading local schools to stop giving students zeroes or Fs on assignments.

At its Feb. 19 meeting, the task force plans to figure out which of its members can start to implement the proposed solutions.

“We can’t possibly have the same expectations in this time,” Kohlmeyer said. “We should stop asking kids to do things different ways and instead challenge the system to bend.” 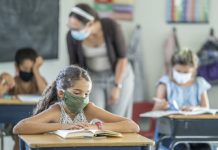 School choice bills have been pushed in Missouri for years. Will the pandemic pave the way? 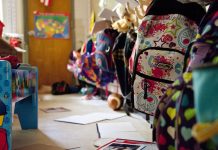 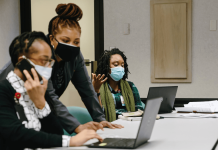 After a pandemic enrollment drop, Missouri educators are trying to find ‘missing’ students

How Missouri is using COVID-19 funds to tackle internet access