WASHINGTON — Republican attorneys general from 21 states, including Missouri’s Eric Schmitt, are attacking the $1.9 trillion pandemic relief law as an “unprecedented and unconstitutional infringement” on state sovereignty because it restricts tax cuts by states.

The attorneys general in a letter to the Treasury Department threatened to take action against the Biden administration over the law’s tax cut provision.

They are criticizing a section of the bill that prohibits states and local governments from using $350 billion in direct federal assistance “to either directly or indirectly offset a reduction in the net tax revenue” or delay the imposition of any tax or tax increase.

The broad phrasing has spurred confusion over what exactly states can and can’t do to their tax rates without jeopardizing the billions in federal assistance, particularly in states where tax cuts already are in the works.

In the sharply worded, seven-page letter to Treasury Secretary Janet Yellen, the attorneys general called for federal officials to clarify that a range of tax scenarios would be allowable, and that the provision will be interpreted only to ban the express use of the federal dollars for direct tax cuts.

The state officials set a deadline of March 23 to receive such assurance, vowing that they would otherwise “take appropriate additional action to ensure that our states have the clarity and assurance necessary to provide for our citizens’ welfare through enacting and implementing sensible tax policies, including tax relief.”

Meanwhile, Ohio Attorney General Dave Yost, also a Republican, on Wednesday filed a motion for a preliminary injunction against enforcement of that section of the law “at least in its application to Ohio,” in the U.S. District Court of Southern Ohio. Yost said in a statement that “the federal government should be encouraging states to innovate and grow business, not holding vital relief funding hostage to its preferred pro-tax policies.”

Republicans in Washington and state capitals have criticized the provision as an unprecedented string attached to the federal dollars. Idaho’s two GOP U.S. senators have introduced a bill to repeal that section of the law.

Democrats have defended the tax cut language as necessary to keep states from voluntarily reducing their revenues, but Republicans argue they went too far.

He added that the attorneys general’s aim was to “get a clarification from the Treasury Department and ensure that the federal government isn’t overreaching into state tax policy.”

The conservative Heritage Foundation has gone so far as to call on states to reject the federal assistance, a stance that the GOP attorneys general described in their letter as unlikely to occur.

The White House has defended the provision, which was added during Senate consideration at the same time as a prohibition on states using the dollars to shore up pension funds.

Press Secretary Jen Psaki said during her press briefing Monday that “the original purpose of the state and local funding was to keep cops, firefighters, other essential employees at work and employed, and it wasn’t intended to cut taxes.”

In Tuesday’s letter, the GOP attorneys general blasted the provision’s scope as “unclear, but potentially breathtaking.” They argue the section could be read to prohibit any tax cuts, even if those changes are unrelated to the federal aid dollars.

“After all, money is fungible, and states must balance their budgets,” the letter argues. “So, in a sense, any tax relief enacted by a state legislature after the state has received relief funds could be viewed as ‘using’ those funds as an ‘offset’ that allows the state to provide that tax relief.”

The letter lists examples of tax changes already underway or under consideration in a number of states that they argue could potentially force a state to have to repay the federal dollars, including proposals in Arizona and Georgia.

“Not one of these common changes to state tax policy has any real or direct connection to the state’s potential receipt of COVID-19 relief funds, yet each of them could be deemed a tax ‘rebate,’ ‘deduction,’ ‘credit,’ or ‘otherwise’ that could result in a ‘reduction in the net tax revenue’ of the state,” the letter argues.

Treasury officials did not respond to a message seeking comment.

But agency spokeswoman Alexandra LaManna defended the provision to the New York Times, telling the paper that it is “well established” that Congress can set requirements on how states spend federal dollars.

“It simply instructed them not to use that money to offset net revenues lost if the state chooses to cut taxes. So if a state does cut taxes without replacing that revenue in some other way, then the state must pay back to the federal government pandemic relief funds up to the amount of the lost revenue.” 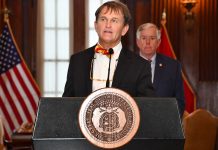 In light of Randall Williams departure from DHSS, Robert Knodell, @GovParsonMO's deputy chief of staff who has played a key role in the state’s vaccine distribution, will serve as acting director until a permanent replacement is found.
https://t.co/2jsVvIjtE3 #MoLeg

[email protected] accepted a letter of resignation from Randall Williams Tuesday. The announcement did not give a reason for Williams’ departure.

His resignation caps a tumultuous tenure as the state’s top health official for the last four years.
https://t.co/2jsVvIjtE3 #MoLeg

He does not say why Williams stepped down in the press release, nor is Williams quoted in the release.

Randall Williams has been the highest profile member of @GovParsonMO's cabinet, even before COVID-19 swept across the state.

Robert Knodell will serve as acting director until a permanent replacement is found.