Schmitt’s decision comes after former Missouri Gov. Eric Greitens jumped into the race earlier this week. Both made their announcements on Fox News.

After Blunt announced he wouldn’t seek a third term in 2022, a parade of GOP candidates began publicly considering running for the now open seat.  Secretary of State Jay Ashcroft was considered the frontrunner, but he bowed out of the race last week. Lt. Gov. Mike Kehoe followed suit a week later.

Those moves opened the door for Schmitt, a former state legislator from St. Louis County who was appointed attorney general in 2019 and won a full term last year.

He has long harbored ambitions to be a U.S. Senator. In 2017, as Josh Hawley was publicly waffling about whether to challenge then-Sen. Claire McCaskill, Schmitt traveled to Washington, D.C., to discuss the race with leaders of the National Republican Senatorial Committee.

He ultimately begged off when Hawley launched his campaign and became the clear frontrunner.

Schmitt was considered a moderate during his two terms in the Missouri Senate. But his politics evolved as the state turned a deeper shade of red over the last decade — and his ambitions turned toward a statewide race.

And since becoming attorney general, his national profile has grown through a series of lawsuits that have bolstered his conservative bona fides.

Last year, Schmitt sued the Chinese government, accusing it of lying and covering up the danger posed by the coronavirus. And just as Blunt was announcing his decision not to run, Schmitt joined a lawsuit against the Biden administration challenging an executive order tightening regulation of greenhouse gas emissions.

But his most controversial move as attorney general was joining the legal effort to overturn President Joe Biden’s 2020 victory.

The lawsuits were ultimately rejected by the U.S. Supreme Court.

More recently, Schmitt has become embroiled in controversy over a robocall sent out by an arm of the the Republican Attorneys General Association that urged supporters march to the U.S. Capitol to “stop the steal” — a reference to former President Trump’s baseless election fraud claims.

On Jan. 6, a day after the robocall, a violent mob stormed the Capitol in an attempt to stop Congress from certifying Biden’s victory.

Schmitt, who serves as vice chairman of the association, has denied knowledge of the robocall. But records show his office had an invitation to a conference call with the group behind the robocall the day it was sent out.

He has also garnered headlines for his efforts to combat violent crime in the urban core, drawing praise for the “Safer Streets Initiative” — a joint effort he launched in 2019 between the attorney general’s office and U.S. attorneys.

But a push by Schmitt to convince Missouri lawmakers to give him the power to prosecute certain homicide cases in St. Louis has been controversial, with critics contending he was simply trying to strip authority away from St. Louis’ first Black prosecutor, Circuit Attorney Kim Gardner.

During his eight years in the state Senate, Schmitt’s highest-profile victory came with legislation capping the amount of revenue municipalities could raise from traffic tickets and other violations.

The bill was inspired by abuses uncovered in the wake of the Ferguson uprising in 2014. An investigation at the time by the St. Louis Post-Dispatch detailed how cities in the St. Louis area relied heavily on court fines and fees to raise revenue for city services.

Schmitt was also a champion during his legislative career for those with autism, inspired by his son Stephen, who is on the autism spectrum, is nonverbal and has epilepsy.

He successfully pushed for legislation allowing a person with disabilities, or their families, to open a tax-exempt savings account for the purpose of paying expenses relating to disabilities, including autism. Another of Schmitt’s bills that became law required health insurance companies to pay up to $40,000 per year for autism therapy.

He also sponsored a bill allowing cannabidiol, a cannabis extract, to be used to treat epilepsy patients who don’t respond to conventional treatments.

And in 2015, after reports surfaced about the vicious beating of a 12-year-old autistic boy by a classmate in the Liberty School District, Schmitt threatened to derail state funding for the district unless it took steps to strengthen anti-bullying policies.

But his legislative career, and his reputation as a political moderate, could also be a stumbling block for Schmitt in a GOP primary.

Most notably, perhaps, was Schmitt’s push for the so-called “China Hub” legislation in 2011. The bill included $360 million in tax breaks intended to make Lambert-St. Louis International Airport a hub for freight flown between China and the Midwest.

The bill drew intense criticism from conservative lawmakers, who bristled at creating a new tax credit program unless the state reined in other tax credit spending. The idea ultimately died after weeks of debate when a compromise couldn’t be reached between the House and Senate. 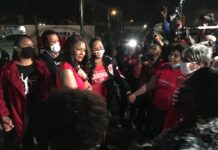 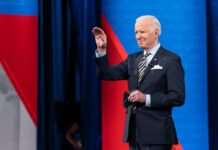 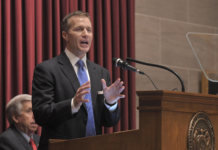 Missouri Gov. Mike Parson reflects on tumult of 2020 at start...