WASHINGTON — The Department of Justice will distribute model “red flag” legislation to states so they can enact laws that would allow courts to temporarily remove a firearm from an individual who is distressed, according to senior Biden administration officials.

The move on red flag laws is among several steps being taken by the administration on gun violence, and follows deadly mass shootings in Atlanta and Boulder, Colo., last month, as well as an increase in homicides in the U.S. that administration officials said disproportionately affects Black and Brown Americans.

Within 60 days, the Justice Department will publish model red flag legislation for states. At the same time, President Joe Biden is also urging Congress to pass a federal law to allow family members or law enforcement to petition a court to temporarily remove any firearms from individuals who are a danger to themselves or others.

“There’s no one better to lead ATF right now. He will help the federal government better enforce our gun laws while respecting the Second Amendment,” a senior administration official said.

Chipman worked as a special federal agent at ATF for 25 years and is currently a senior policy adviser at Giffords, a gun violence prevention advocacy group founded by former U.S. Rep. Gabby Giffords, (D-Ariz.), and her husband, U.S. Sen. Mark Kelly, (D-Ariz.). Giffords in 2011 was shot in the head by a gunman while at a constituent event in Tucson and now leads the advocacy group.

The Biden administration will also direct the DOJ to issue a proposed rule within 30 days that will stop the proliferation of “ghost guns,” which are homemade guns that lack a serial number, making them difficult for law enforcement to trace.

DOJ will also be releasing an annual report on firearm trafficking— the last report was done in 2000.

The administration in addition is proposing a $5 billion investment over eight years in the American Jobs Plan in evidence-based community violence interventions, such as helping connect people to job training and job opportunities.

The Department of Health and Human Services will organize a webinar to help states understand how they can use Medicaid reimbursements for intervention programs.

The administration is not taking action on a ban on assault rifles. But after the mass shooting in Colorado where 10 people were killed, the president called on Congress to ban the weapons.

A week before the Colorado mass shooting, another mass shooting in Atlanta left six Asian American women dead, as well as two other people. 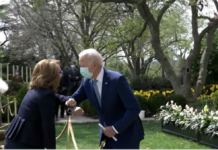 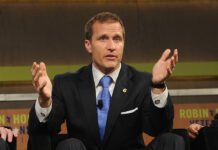 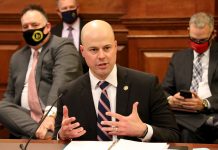