Missouri’s state-funded preschool programs met quality benchmarks but have room to grow to serve a wider swath of children, according to a new report from the National Institute for Early Education Research at the Rutgers Graduate School of Education.

Published Monday, The 2020 State of Preschool Yearbook assessed pre-kindergarten funding, enrollment and quality for state-funded programs across the country for 2019 to 2020. Nationwide, states added 12,000 preschool seats, but saw the number of 4-year-olds enrolled decline for only the second time since 2002.

For the first time, the Missouri Preschool Program met all 10 quality standards laid out by the National Institute for Early Education Research, or NIEER, and was just one of six states to do so.

However, the reach of Missouri’s programs was small, altogether serving an estimated 7.4 percent of the state’s 4-year-olds and just 1.5 percent of 3-year-olds. Missouri was just one of eight states to serve less than 10 percent of 4-year-olds in state-funded preschool, and it ranked 41st in terms of access for 4-year-olds, per the report.

When adding programs for both special education and Head Start, that reach increased to 20.8 percent of 4-year-olds and 12.7 percent of 3-year-olds.

“It’s encouraging to see Missouri increasing preschool access, but per child spending needs to increase at a rate that will support the kind of quality program all children deserve,” Steven Barnett, NIEER’s founder and senior co-director, said in a statement.

To meet the needs of high-quality, full-day preschool, the report recommended a minimum of $11,508 per child needed to be spent in Missouri — a gap of about $8,300 from the average of $3,208 in state spending per child enrolled, per the report.

Missouri ranked 36th in per child spending, with Washington, D.C., topping the list spending $18,421 per child enrolled in preschool and reaching 79 percent of its three and 4-year-olds.

To serve all eligible low-income three and four-year-old children in high quality, full-day preschool, which would be an estimated 47,186 additional children, a boost of $543 million would be needed for Missouri. For universal pre-kindergarten, that cost would rise to more than $1.3 billion.

Research has shown that investments in early childhood development may help students achieve better academic outcomes in the long-term.

This year, early childhood education has been deemed a priority by both legislative leaders and Gov. Mike Parson. Linda Rallo, vice president of Aligned, a nonprofit coalition of business leaders focused on improving education in Kansas and Missouri, says that level of support makes it feel like Missouri is on the cusp of gaining ground.

New initiatives are underway through a three-year $33.5 million Preschool Development Grant Birth to Five, as well as the new Office of Childhood that will house all early childhood programs across state government.

“I feel like we are just on the precipice of really moving the needle,” Rallo said, later adding: “People are doing a lot behind the scenes to set us up for, I think, some tremendous progress in the next five years.”

Launched in 1998, the Missouri Preschool Program awards grants to programs for up to five years, with priority given to those serving children with special needs or who are from low-income families.

According to the NIEER report, for the 2019-2020 school year 461 children were served through the program with just four percent of school districts participating.

However, the program is being phased out as public schools are prohibited from receiving funds if they are also participating in the foundation formula for pre-kindergarten — which became available to all districts in fiscal year 2019. The Missouri Preschool Program is expected to end fiscal year 2021, according to the Missouri Budget Project, a left-leaning think tank focused on fiscal issues.

When the state fully funded K-12 schools for the first time in 2017, it kicked off a trigger for a 2014 law that would allow all districts in the state to receive state aid to pay for early childhood education for up to 4 percent of their students who qualify for free and reduced-price lunch. Until that threshold was met in 2017, only unaccredited and provisionally accredited districts could previously qualify.

For that program in the 2019-2020 school year, 6,413 students were enrolled with roughly a third of districts participating, according to the report.

“We’re really looking at only two years where they’ve been able to draw these dollars down and getting the word out that’s available,” Rallo said of the foundation formula funding. “And then you throw the pandemic in there and it’s a whole ‘nother thing.”

Rallo said organizations are trying to better understand what barriers exist to schools participating — whether it be because districts have a large number of students paying tuition or because they don’t qualify for enough state aid to justify launching a program.

Innovative solutions have helped bridge those gaps, Rallo said, like passing legislation in 2019 that allowed districts and charter schools to use that state aid to contract with private providers — leading to cooperatives in both Kansas City and St. Louis.

Part of improving the reach of early childhood education in Missouri, requires knowing where things stand — an aim of a new integrated data system that will house info from multiple programs in one system.

“I think they’re going to be able to really have a better understanding of what we’re offering, who’s getting what services through investments in data and really being able to count all of that,” Rallo said.

Another new initiative getting off the ground is a network of regional early childhood hubs, that Rallo said will help serve as a single point of entry to connect families with services.

The impacts of the pandemic also have yet to be fully assessed, and the NIEER report stressed that states should direct federal funds toward early childhood education programs to help address the consequences of the pandemic on kids.

“Preschool programs need not just to be ‘held harmless’ for the 2020 school year, but they also need more funding to handle the unique needs of this cohort of children and the additional enrollment resulting from the pandemic,” the report read, warning of the possibility of children being held back to compensate for learning loss during the pandemic.

Enrollment across Missouri’s public pre-kindergarten programs in 2020-2021 experienced the largest decline of any grade level, seeing a drop of nearly 8,900 students from the previous year — a decline of about 23.4 percent, according to state data. 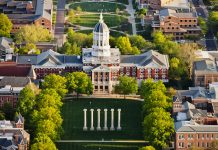 Missouri pre-K programs have room to grow. Advocates hopeful progress is on the horizon

How the pandemic is complicating mental health services for Kansas City...

After a pandemic enrollment drop, Missouri educators are trying to find...